Often playfully macabre, theatrical, and possessing an impressive and creative dedication to all the possibilities of black light, I first met James “Zirco” Fisher at the Bazaar of the Bizarre where he was promoting a number of his diverse projects. Aside from being a part of the dark ambient group “Squid Lid”, Zirco Fisher also does an array of illustrations including his “Disfigures of Speech” series, one of which is shown below: 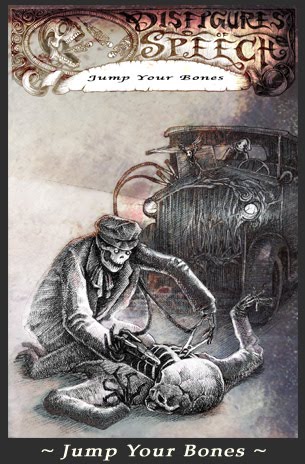 Whether DJing or performing their own work, Squid Lid’s shows are a sight to see, for throughout they constantly change up their fantastical, black light costumes to things ever more outre and strange.

Which brings me to the second topic of this post. Black light, or ultraviolet light was discovered by Johann Wilhelm Ritter (1776-1810) in 1801 Ritter, an acquaintance of such figures as Goethe, Alexander von Humboldt, Herder and Schelling, was part of the early naturphilosophie movement in Germany at the beginning of the nineteenth century. Like several naturphilosophen, he held that a base principle of nature was that of polarities. The discovery of infrared light had been announced in 1800 by the British astronomer William Herschel, and Ritter reasoned that there must be something on the other side of the spectrum, and went about devising elaborate means of detecting it.

Ritter was also infamous for his tendency to perform often excruciating electrical experiments on almost every tissue of his own body, but that is a story for another day.