H. P. Lovecraft’s interests mark him as one of the most scientifically engaged writers of fiction in the first half of the twentieth century. His works demonstrate an awareness of Einsteinian and quantum physics, Freud and psychoanalysis, astronomy, chemistry and the question of progress. He also wrote over a hundred articles dealing almost exclusively with these themes. Despite this, Lovecraft’s importance in the context of the history and philosophy of science has largely been overlooked.

A few examples of this kind do exist, such as S.T. Joshi’s “H. P. Lovecraft: The Decline of the West”, which attempts to place Lovecraft in the tradition of Oswald Spengler’s critique of progress. Overall, however, there has been little written on this topic in any concentrated way, and what has appeared has generally been dominated by the writings of Joshi.

Lovecraft’s philosophy of science has been much maligned by narrow interpreters who see in his exultation of the unknown an anti-scientific nostalgia and an unhealthy, morbid fascination with madness and human frailty. While by the end of the 20th century Lovecraft’s fiction had developed a cult following, this interest and the substantial cultural capital afforded by it has seen little reflection in academic circles, partly, one thinks, for this very same reason.

My recent interests have lead me to a comparison of Lovecraft’s sense of “Cosmic Horror” with Einstein’s description of “Cosmic Religion”. Given Lovecraft’s knowledge of Einstein this connection is tantalizing, more so because of the work I have been doing on science and the uncanny. All three of these concepts are closely related, and are worthy of much further consideration. 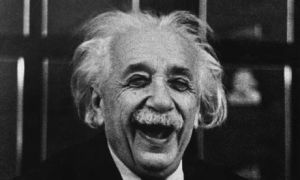 A Canadian film that interweaves Lovecraft’s life and literature: “Out of Mind: The Stories of H.P. Lovecraft”.

If you can get a plushy of it, it must be important: